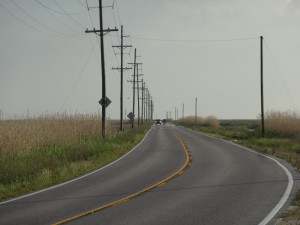 When people think about the Gulf Coast they mostly imagine beautiful sandy beaches, clear blue sea and colourful cocktails slowly sipped on the porch. Such associations are all true but those things are not really what I’m looking for on holiday (apart, of course, from the cocktails).

So, during our 2014 exploration of the Deep South, we skipped these clichéd aspects of the Gulf and headed for swamps, marshes and industrial installations.

We left New Orleans and headed west on Interstate I-10. Very quickly (just a few miles outside the metropolitan area) the landscape got quite wild. Basically, after leaving suburban Jefferson Parish the only signs of human activity are the road and the utility lines running on multiple bridges and causeways. It feels as if you are driving on water. The experience is similar to the famous Overseas Highway (US Hwy 1) joining Key West to the rest of Florida, especially in places where I-10 and then I-55 run alongside Lake Pontchartrain.

For example, driving on I-55, we crossed the 36km (22 miles) long Manchac Swamp Bridge. Some people might call it boring but I found it an amazing drive. An endless ribbon of concrete suspended a few metres above the brackish swamp and cutting through forests of bald cypresses growing straight out of the water. It all looked absolutely awesome in the low light of the setting sun and with minimal traffic. This was Louisiana as I have always imagined it. 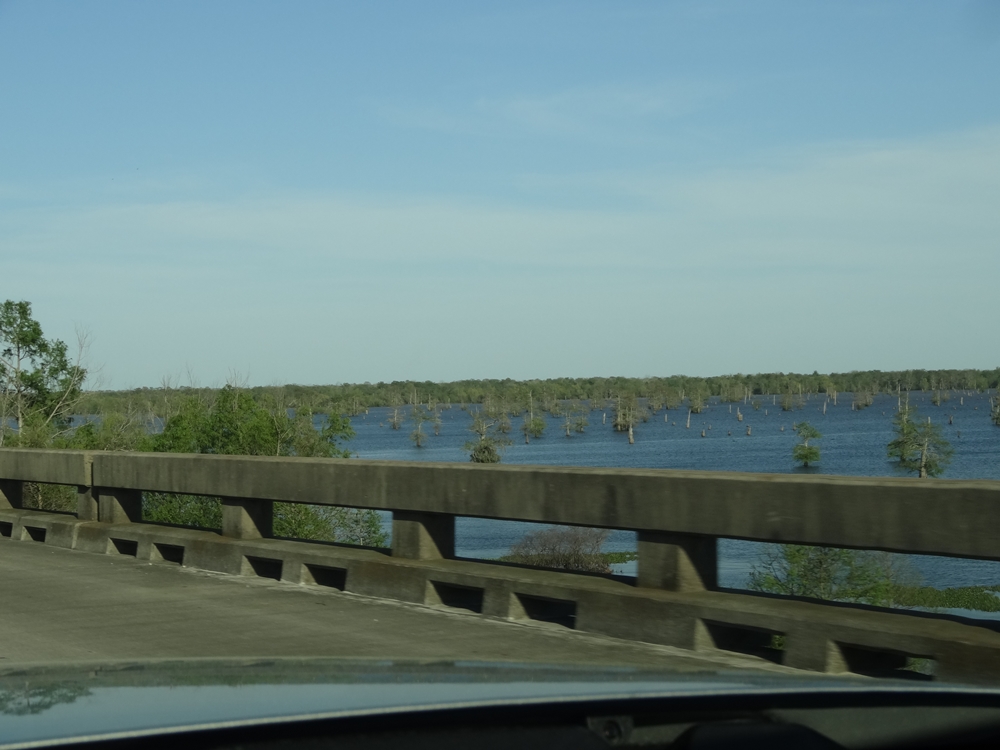 After spending the night in a small motel in the town of Hammond (where the lady at the reception was genuinely surprised to see a passport and said: “we don’t see many of those here”) we headed west again, crossing the Mississippi at Baton Rouge, and then drove on yet another long bridge over the swamps. The Atchafalaya Basin Bridge is “only” 29km long but still very impressive, crossing empty, wild and heavily forested Atchafalaya Swamp, the largest wetland in the United States. 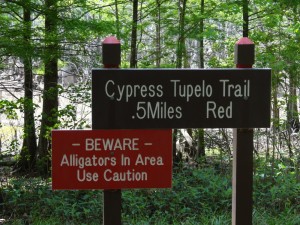 Now, as much as I like bridges (which is a bit of an understatement as I should probably really call myself a bridge geek) it was time to leave the main freeways and get closer to nature.

We got off the interstate at Lake Charles and in 10-15 minutes entered the Sam Houston Jones State Park. This relatively small park (covering only about 1000 acres) offers a good introduction to the Louisiana landscapes. The park consist of woodlands, lakes and rivers but its most prominent feature is numerous bald cypress trees. We spent a few hours in the park (even getting “mildly” lost for a while) but failed to see a single alligator despite the multiple warnings about not feeding them. However, we did see our first wild armadillo and got very excited for that reason. 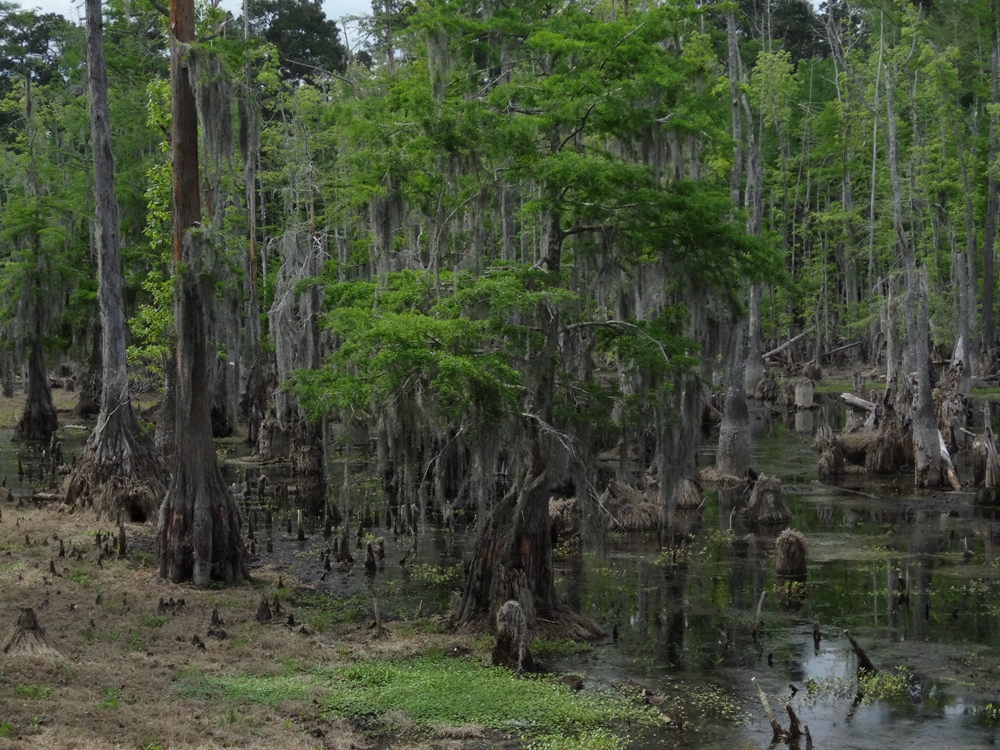 After leaving the park we changed the direction of our travel and now headed south as it was time to finally reach the open waters of the Gulf of Mexico. However close it looked on a general road map of the state it was still about a 30 mile drive passing endless marshes occasionally punctuated by tiny settlements or huge natural gas and oil installations By the way, let me explain the difference between swamps and marshes. Swamps are basically wetlands which are forested while marshes are dominated by grasses and reeds.

As we were driving south along the Louisiana Hwy 27 we left the wild dark swamps well behind us and were now enjoying open vistas over the marshes which really looked like a sea of grass. Along the route there are a few places with boardwalks over the marshes and while walking along one of them we finally spotted some proper, large, wild alligators. One of them was a really large beast indeed. Luckily they were not very active as they seemed to be enjoying an afternoon siesta. 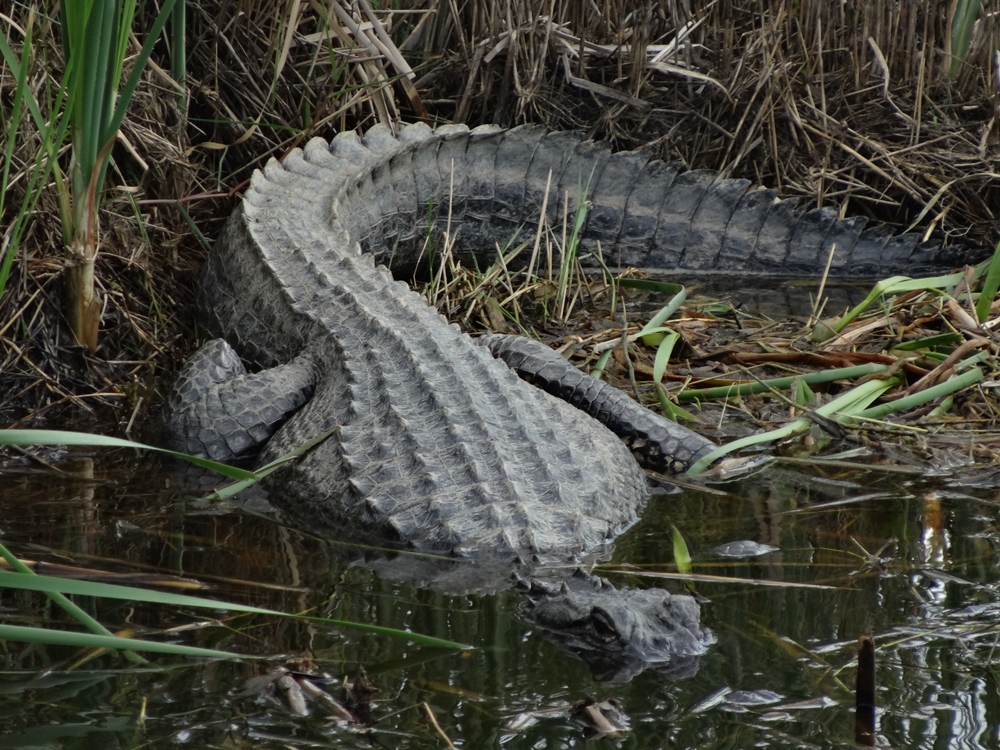 We finally reached the Gulf waters where Hwy 27 joins Hwy 82. There was a small settlement consisting mostly vacation homes, empty at the time of our visit. Only a few folks were fishing and walking along the beach and it was all a far cry from the typical crowded beach resorts. This was the coast as I like it. Especially in the last few hours of the day when the sun is low and casting long shadows. 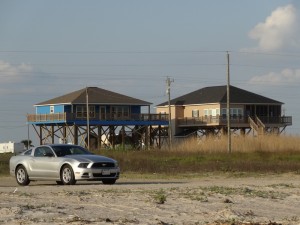 Now we turned again and followed Louisiana Hwy 82 west along the coast, towards Texas. It was an amazing drive, straight towards the setting sun, one of those iconic American experiences. Especially as this sort of marshy, sparsely populated, low-lying coast is rather rare in Europe. The few settlements we passed on the way to Texas consisted mostly of a small number of houses on stilts. There was even a church, school and a fire station, all build on stilts. It really shows how vulnerable this coast is in the face of hurricanes. As much as I enjoy travelling in places like this I would never live here. It is just way too exposed. Additionally, if the current trends continue, most of this landscape will disappear under the waves in the next few decades.

Another factor which made our drive unlike anything I have experienced before was the offshore oil rigs visible on the horizon. In the distance they really looked like some alien spaceships, especially in the evening with their industrial lights switched on.

By the time we reached Sabine River, which down here marks the Texas-Louisiana border, the sun had just set and the light was quickly fading. Still, it was bright enough to see how the area was dominated by the energy industry. There were huge gas liquefaction plants under construction as well as an enormous oil refinery. All those miles of pipes, hundreds of tanks and thousands of lights created an otherworldly sci-fi atmosphere, especially with the deep red sky behind them. 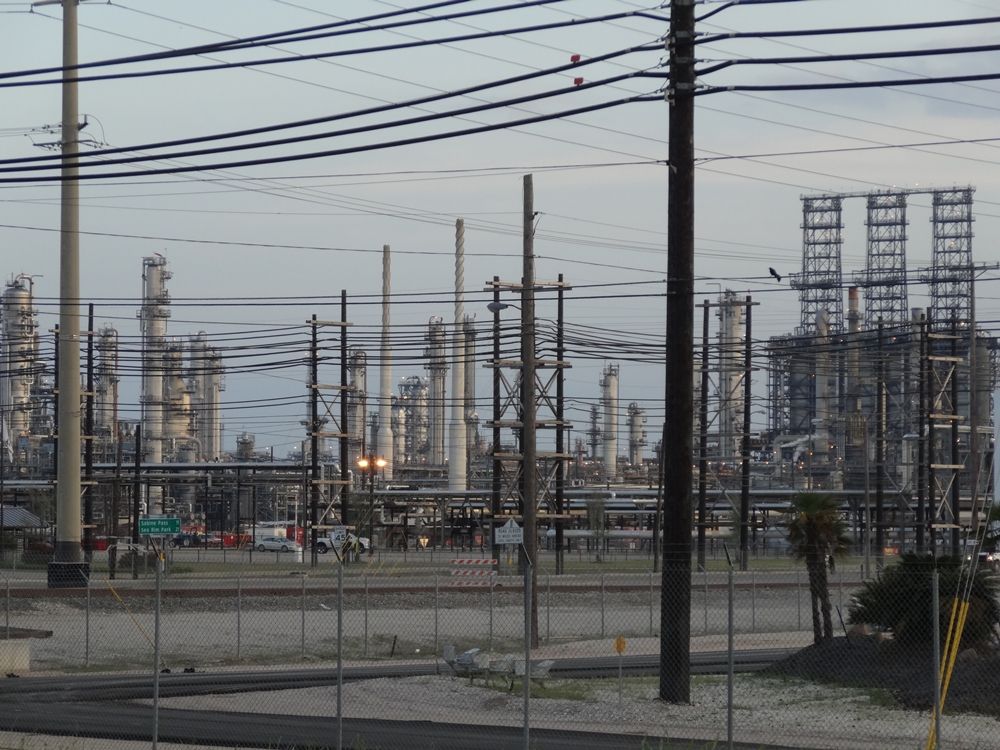 Now, I know there are all the environmental issues, from global warming to coastal erosion, but on that particular evening, and from a purely visual perspective, all this industrial labyrinth looked absolutely amazing. Also, it is how big chunks of the Gulf Coast really look like, especial in Texas and Louisiana and I always want to see the real America not only the stuff from the tourist brochures.

This was pretty much our last taste of Louisiana and the wider Gulf Coast region as from now on we were heading inland towards Houston and then the heartland of the Lonely Star state.

I know that this chapter doesn’t describe any particular highlights but I really enjoyed our, a bit aimless, wanders between New Orleans and Houston, and I believe that if you have an open mind you can enjoy it too. 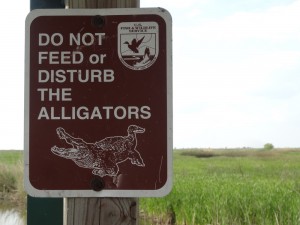