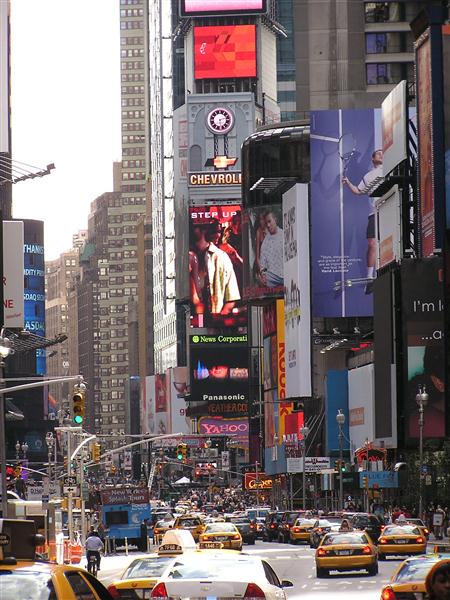 For most people the city of New York is one of the major destinations in the US, but for some reasons I was never particularly drawn into it. Still, as it was on our way back to Boston, we decided to give it a go.

We spent the night in one of the countless and totally indistinguishable suburbs of the great city. Here it makes sense to point out that such suburbs are home to majority of the metropolitan New York population. All the hippy and cool folks of Greenwich Village, East Village or SoHo are actually far less representative New Yorkers than people working in McDonald’s in Bronx or driving delivery vans on the New Jersey side of the Hudson River. Anyway, we had only one day and decided to get the most out of it.

It was Sunday morning, about 9am, when our frenetic 12 hours in Manhattan began. We entered the island of Manhattan via George Washington Bridge which is located in its northern part. To be honest it is far less spectacular approach than some of the others but it didn’t really matter as we quickly made our way towards one of the highlights of the city, the Central Park. Well, to be honest, it wasn’t really quick at all because we had to park our car first. And it is not an easy task in NYC, even on a Sunday morning. Anyway, we finally managed to squeeze it into one of the smallest and most claustrophobic underground parking garages I have ever seen in my life. However, located on the 96th street, it was just minutes from the park. But before we managed to reach the park, we unexpectedly got caught right in the middle of some street party. The road was closed to traffic and, even on an early morning, full of people enjoying themselves. I later learned that it was probably Annual Upper Broadway Autumn Festival. Or maybe not? It doesn’t really matter, it was fun. 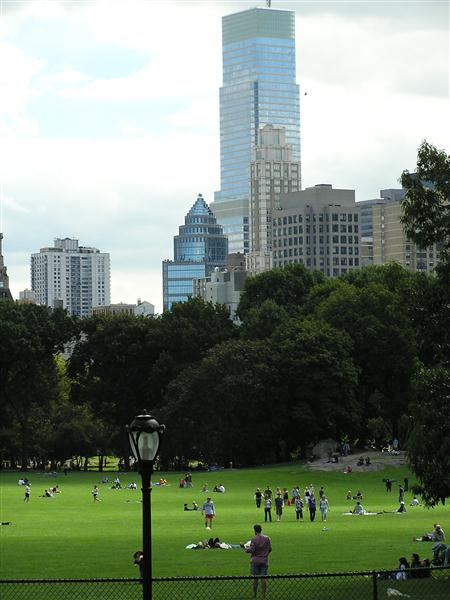 Finally we reached Central Park. Here I have to admit that I absolutely love it. I find this perfectly rectangular bit of tamed nature, located right in the middle of one of the most densely populated cities on earth, absolutely fascinating. Whenever I looked at the map of Manhattan I always wanted to visit it.

Covering 843 acres (341ha) of almost entirely landscaped land it was designed by the renowned landscape architect, Frederick Law Olmsted. If you ask me he did an amazingly good job. The park looks really natural in its appearance and it is much more heavily wooded than for example Hyde Park in London. In places it might be sometimes possible to forget that you are really in the middle of a teeming metropolis. But on Sunday, around 11am, the whole park was full of people and you would knew you were in the city. They were jogging, cycling, rollerblading, skateboarding or just walking, with or without dogs. It seemed to me that New Yorkers are quite an active bunch of people.

We leisurely crossed the park, stopping here and there to admire some of its quirky monuments, like for example Alice in Wonderland or Polish King Jagiello. Finally we reached the Columbus Circus in the south-western corner of the park. Here you can see sharp contrast between the greenery of the park and concrete, steel and glass jungle of Midtown Manhattan, which is one of the densest and tallest parts of the city. In this part of town you can also find such architectural icons like the Empire State Building, the Chrysler Building or Rockefeller Center. I would love to visit all of them but unfortunately we only had time for a quick lunch in the slick and modern Time Warner Center, before continuing in our quest south. 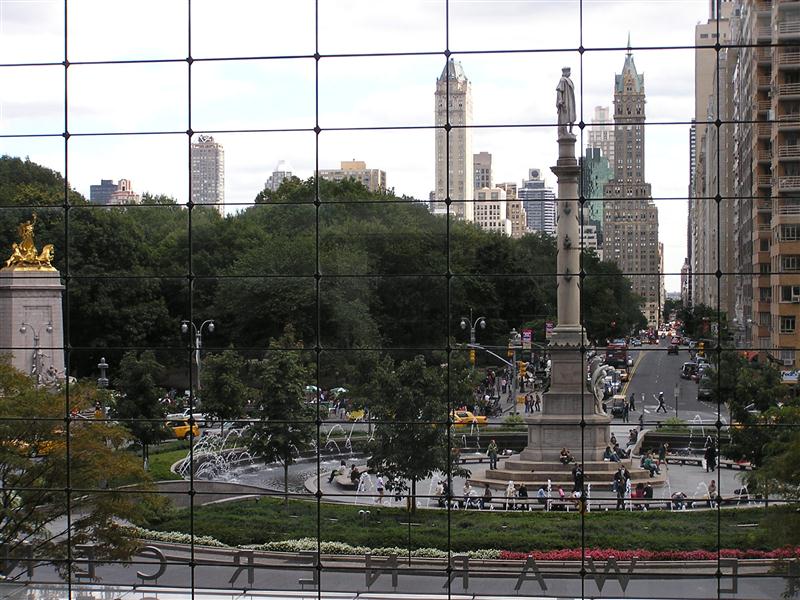 Important stop in Midtown was Times Square. It is so well known that there is no much point to write about it. I can only say that it did confirm all my preconceptions. It is crazy busy, noisy, bright, and colorful, somehow seducing you like a brash city girl. For anyone familiar with London comparisons with the Piccadilly Circus are unavoidable. Well, Times Square feels busier and noisier. Its massive screens and neons are larger and brighter than the ones in London and there are many more of them. It is simply bigger and lauder, like many things in America. 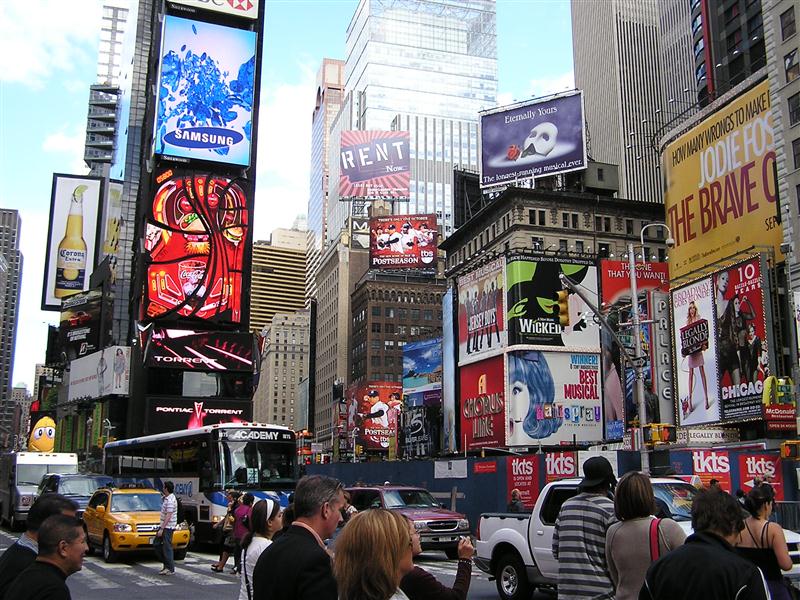 From the full-on extravaganza of the Time Square we kept walking south, sometimes on Broadway, sometimes venturing into some small side streets of Greenwich Village or East Village. In the 1960s these neighbourhoods were the real bohemian heart of the cultural life of New York. They are now almost totally gentrified and horribly expensive places to live, but it is still nice to walk their relatively quiet streets and admire the well preserved buildings. Also here, at the corner of 12th Street and Broadway, is located my favourite shop in New York, the Strand Bookstore. One of the largest used bookstores in the world, it is claiming to have 18 miles of new, used and rare books. It is also an incredibly messy and fascinating place where chaos seems to be the rule. I could spend hours there but unfortunately it was already late afternoon so we kept going south before reaching the World Trade Center site. At the time of our visit it was one huge building site and the scars of the attacks were still visible.

As I was travelling with person who is mildly obsessed about all things Irish we couldn’t skip the Irish Hunger Memorial. Located on the banks of the Hudson River, near the Battery Park City, it is an interestingly landscaped plot, which utilizes stones, soil, and native vegetation brought in from the western coast of Ireland and contains stones from all of the different counties of Ireland. From the nearby esplanade you can get clear, even if a bit distant, view of one of the New York City landmarks, the Statue of Liberty. It was just before the sunset so the view we got was especially spectacular. 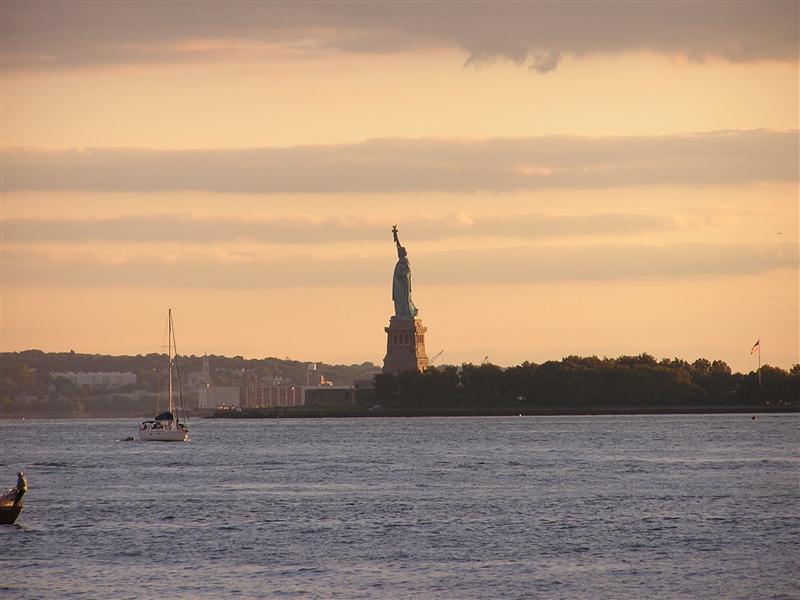 By the time we got the famous Brooklyn Bridge it was already dark so we only had enough time to reach its midpoint before returning to Manhattan. The iconic bridge offers great views from its centerline walkway located above the traffic. In my opinion it is well worth visiting, but you have to take to account that I am a bridge and road enthusiast.

The last places we visited in New York, were neighbouring Chinatown and Little Italy. Nowadays Little Italy is really little and getting smaller with every year. By contrast the Chinatown is growing and gradually taking over the streets once inhabited by the Italians. They were busy and booming places, even on a late Sunday evening. There was in fact Feast of San Gennaro celebrations going on that evening and it was impossible really to know where the Little Italy ended and where the Chinatown started. We had a really good evening wandering among the stalls and sampling some delicious Italian-American food before settling for some Chinese takeaway. 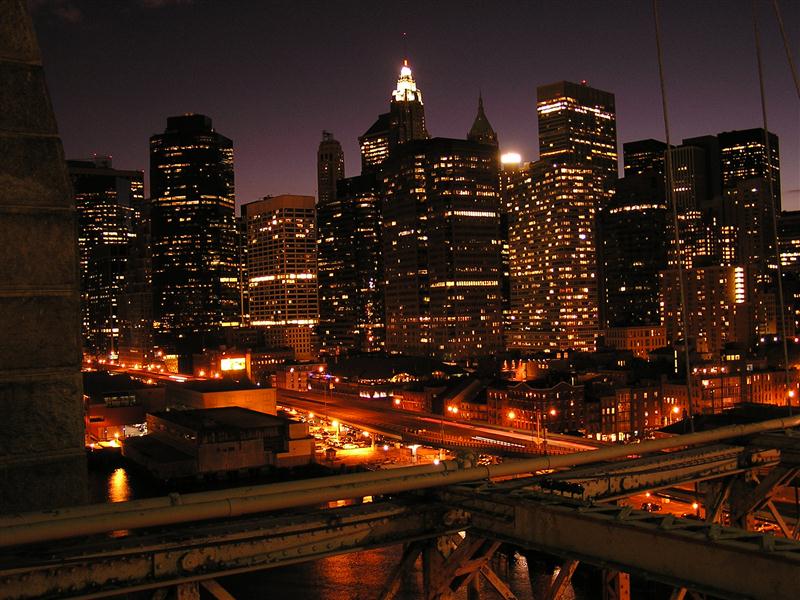 It was about 9pm and we were by now exploring Manhattan for about 12 hours. We were dog-tired and it was time to head back to our car. As it was well over 10 miles away we had the chance of using the world famous New York subway system, which offers fast trains and even air condition. As a Londoner, used to small, slow and hot trains, I got seriously jealous.

We finally left Manhattan probably about 10 or 11 pm just after nearly crashing into some dodgy characters in northern Harlem and our day in the NYC ended.

It was crazy hectic day and that’s probably why I enjoyed it so much. Of course it is impossible to visit NYC in one day, that is just silly and stupid idea, but even a few hours can give you a taste of what to expect when you come back later for longer. Because you will come back, so will I.