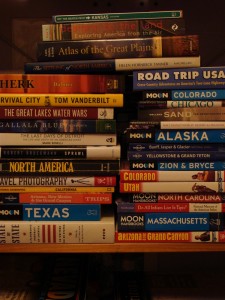 Now, the time has come to write about some seriously geeky books about America, especially its geography.

To connect with my last post let’s start with a book which connects history and geography. “North America: The Historical Geography of a Changing Continent” by Robert D. Mitchell and Paul A. Groves describes in great detail the formation and growth of the North American regions. The book explores the acquisition of geographical knowledge, cultural transfer and acculturation, frontier expansion, spatial organization of society, resource exploitation, regional and national integration, and landscape change. It is full of maps and tables and it explains why American looks as we know it. It even explains why America is called America in the first place. Among many things it, for example, describes is how Spanish missions and presidios were organized, how ribbon land organization developed in the St. Lawrence valley or in parts of Louisiana, how the well-known American grid pattern was developed during the westward expansion, how railways changed the Great Plains or how suburbanization started (earlier than many people think). It is one of the best academic book I have ever read.

The next book which also touches on American spatial organization is “Sprawl: A Compact History” by Robert Bruegmann. Suburbanization and sprawl are of course hot and controversial topics so this book got some mixed reviews (to say the least). As the title says it is a history of sprawl from ancient Rome through, for example, inter-war London all the way to the exurbs of Los Angeles or Atlanta. But it also describes the causes of sprawl and presents modern anti-sprawl policies. Bruegmann presents a fantastic work in sprawl’s defence. As he mentions in his preface though, this work is not intended to be an apology for sprawl, it’s supposed to be in its defence and he does a good job doing it throughout the book. It might not present views favoured by many (especially in Europe) but it is a thought provoking book challenging traditional views and it is well worth reading.

Also connected to the issue of suburbanization and sprawl is the next book on my list. In “The Last Days of Detroit: Motor Cars, Motown and the Collapse of an Industrial Giant” Mark Binelli tells the story of the boom and bust – and of a new society to be found emerging from the debris. The book combines a fairly good overall history of one of the great American cities, from its French fur-trading beginnings until its recent collapse, with an account of the latest changes and developments (for example urban farming or the vibrant art scene). Binelli is a Detroit native (albeit not living there) and he clearly cares about the city, which makes this book a great personal account of one of the most interesting places in the US.

The next book I would like to recommend couldn’t describe a more contrasting side of America, its rural heartlands. “Ogallala Blue: Water and Life on the High Plains” by William Ashworth tells the story of one of my favourite US regions, the Great Plains. Ogallala aquifer stretches from Texas to South Dakota and from Colorado almost to Iowa covering an area almost twice the size of Great Britain. This book is great mix of personal travelogue type stories with expert research about one of the most important issues of the American west, water. Ashworth writes about the geology of the aquifer, farming and ranching in the region, the history of the aquifer exploration and about its uncertain future caused by overuse. It is a really great read about a fascinating aspect of one of the most underrated corners of America.

Another book also about water is “The Great Lakes Water Wars” by Peter Annin. The Great Lakes are the largest collection of fresh surface water on earth, and more than 40 million Americans and Canadians live in their basin. It is also another of my favourite region of America however underrated and ignored by most visitors to the US. This title discusses the battle to protect the largest reservoir of fresh water on earth from questionable projects of water diversions or even crazy ideas of exporting it by tankers to China. The author interviewed numerous politicians, government officials, scientists, environmentalists, lawyers and other key figures to give the reader an inside view of the struggle to protect the Great Lakes. The book also contains several case studies including the demise of the Aral Sea in Central Asia after the water from rivers entering the Aral Sea was diverted for agricultural irrigation and the reversal of the Chicago River away from Lake Michigan. It is a well balanced and informative book, a bit heavy on legal and political issues but still very entertaining.

Now, “Survival City: Adventures Among the Ruins of Atomic America” by Tom Vanderbilt is definitely one of the most interesting books I have read in the last few years. A fascinating travelogue mixing the frightening and the comical as it takes us around some of the most unusual sites in the US. From the bunkers of Greenbrier, West Virginia (where Congress was supposed to be relocated when the worst came to the worst), to the NORAD headquarters deep inside the Cheyenne Mountain, from “proving grounds” of Nevada, where entire cities were built only to be vaporized, to the sites of decommissioned intercontinental ballistic missile (ICBM) silos in the Dakotas. The author travels the Interstate (itself a product of the Cold War) to uncover the sites of Cold War architecture and reflect on their lasting heritage. This book covers a fascinating array of Cold War relics in America. The Cold War was the war that never happened but it still spurred the most significant buildup of military contingency in the US, a collection of truly bizarre and impressive installations. I was always mildly fascinated by military technology but I think this is a great book for everyone with an open mind and looking for a new take on America.

At the end something a bit lighter (but still informative). “How the States Got Their Shapes” by Mark Stein describes in fifty manageable chapters how the US states got their often weird shapes. Some of the stories in the book (like for example the war between Ohio and Michigan) are absolutely fascinating. This book might be quite repetitive but you can still choose on a few particular chapters. I myself as a true map and US enthusiast thoroughly enjoyed it and read it from cover to cover.

That’s it for now. When I find an interesting book on America, I’ll share it here; meanwhile I’m busy preparing for my next trip to the USA…