When one mentions the east coast of the US most people think of big cities like Boston, NYC, Philly and Washington DC or other busy places like Atlantic City or Cape Cod. But there is also another side to this region; small quiet towns, rural roads, dunes and lighthouses. And that’s where I was heading.

My adventure really started when I entered the state of Delaware, just 25 miles south of Philadelphia. Why did I come here in the first place? Well, in the last few years I’ve been trying to visit every single state of the US and Delaware was one of the few left on my list of unvisited ones. With another box ticked I started thinking, what on earth can I see now that I’m here? Let’s be honest, Delaware doesn’t really sound like the most exciting of destinations. So I checked myself into some random motel, bought a few beers and started browsing tourist brochures and maps. It was then that I realized that I was only a few miles away from the Dover Air Force base and its Air Mobility Command Museum. And that was where I headed for the following morning 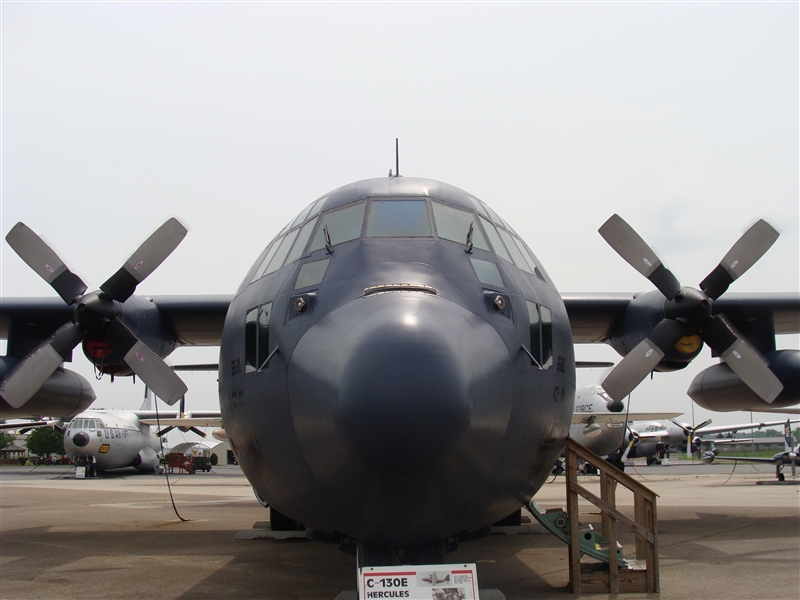 Boy, I really hit the jackpot as this is one of the best museums I have ever visited. It has a large collection of fully restored cargo and tanker aircraft, among them such beauties as the C-130 Hercules, C-141 Starlifter, KC-135E Stratotanker and even the B-17 Flying Fortress. What is the best thing is the fact that you can actually get inside some of the planes, for example the Hercules and Starlifter are both open to visitors. In the Hercules you can even get inside the cockpit! Wow! I had bucket-loads of fun out there and would recommend this place to anyone even remotely interested in aviation. And all this for free. Can you imagine? One word of warning, a visit here will make you feel and behave like you are small boy (or girl) again. 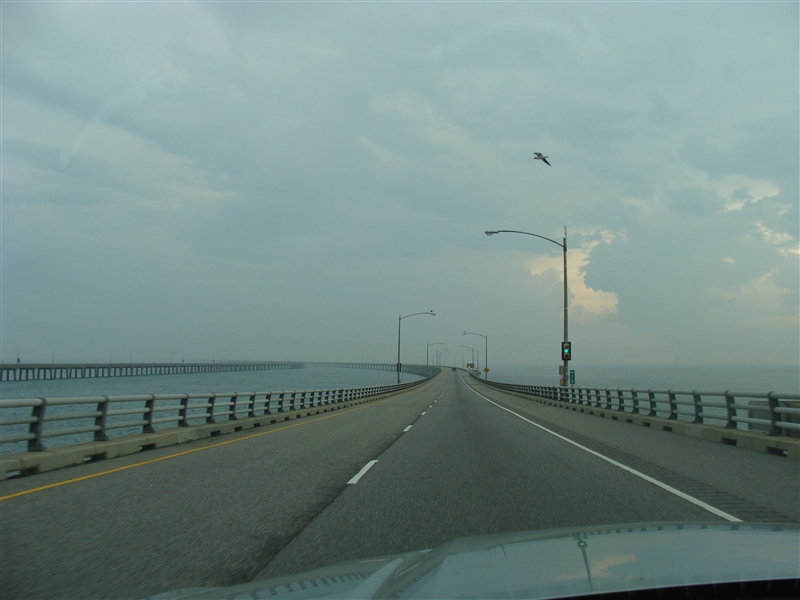 From Dover I drove south through the 270 km long Delmarva peninsula. Its name comes from the first letters of Delaware, Maryland and Virginia which all occupy parts of it. As I was getting further south across the flat landscape it was getting more and more rural. At the tip of the peninsula is located one of the greatest engineering marvels in the US, the Chesapeake Bay Bridge-Tunnel, a 37km long system of low bridges, tunnels, artificial islands and causeways. It is fun to drive, especially around sunset when the views are breathtaking. In some moments you can feel as if you are driving on the sea itself. 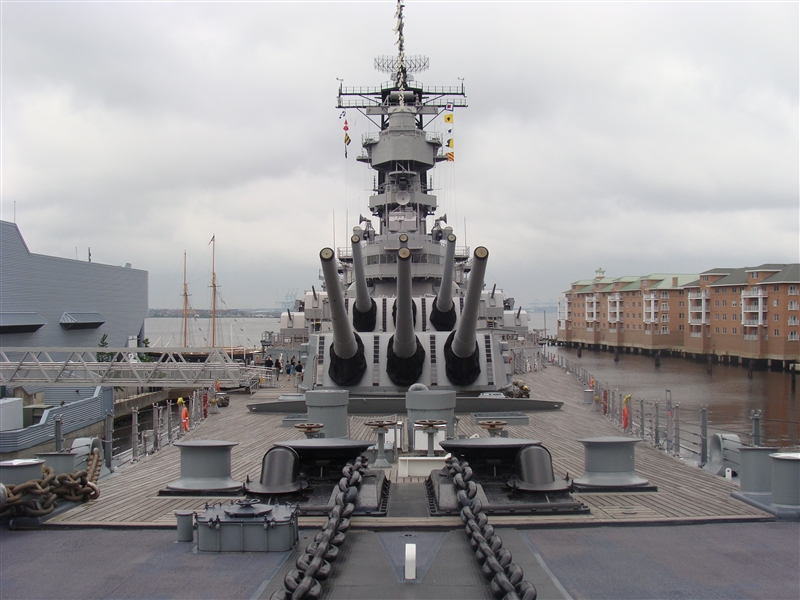 Across the bridge I entered the region of Hampton Roads, also called Tidewater, which includes a dozen or so cities, the biggest of them being Norfolk and Virginia Beach. It is a real suburban mess with potholed narrow highways choked full of traffic. Not fun at all. Still, the beaches are nice and there are some attractions. One of them, which I can definitely recommend, is the maritime-oriented science centre and museum, Nauticus. It is full of modern hands-on exhibits but the best part of it is the Iowa-class USS Wisconsin, one of the biggest battleships ever built. She served in WWII, the Korean War and the Gulf War and she is a real photogenic beauty. You can explore its deck through a self-guided tour but also ask questions of one of the volunteers on board as they are retired navy themselves and can share their stories.

From Norfolk I headed 50 miles north to Jamestown. To get there I had to battle crazy busy suburban traffic, but it was well worth it. Jamestown is, in a way, a birthplace of America as we know it. Established in 1607, by the Virginia Company of London, it was the first permanent English settlement in North America. Nowadays there are actually two sites worth visiting there. First of them is Historic Jamestowne which is managed by the National Park Service and covers the location of the original Fort James. Here you can see archaeological remains of the original fort as well as a 17th century church tower and the site of the 17th century town. Thousands of artefacts found during the excavations are displayed in the museum on site, called Archearium. 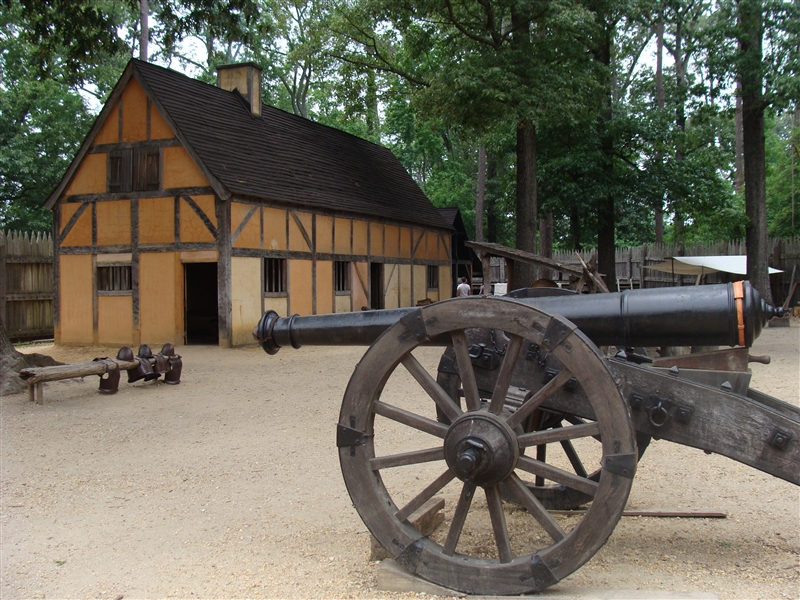 The second major attraction here is Jamestown Settlement which is actually a reconstruction of the original settlement. Located a few miles from the original site, it is a living history museum where costumed actors play roles of settlers and Indians. So you can join the town meeting or watch settlers cooking, firing muskets, blacksmithing, woodworking etc. Outside the fort you can also board replicas of the three ships which brought the colonists. What is really striking is how small the vessels are. It is hard to imagine how people survived the long transatlantic journey on these tiny wooden boats. Each boat is manned so you can ask “the captain” questions. Apparently, these boats are also fully functional and still do sail occasionally. I had a lot of fun in Jamestown as Americans are really good at organizing places like this. It is no coincidence that Hollywood and so much of the other entertainment industries are in the US, they just know how to have fun. And make money out of it.

From the Chesapeake region I continued further south into North Carolina. I got lost trying to avoid toll roads but I eventually made it to the Outer Banks, also known as OBX (don’t they love abbreviations out there?). The Outer Banks are a 320 km long chain of narrow barrier islands which cover most of the North Carolina coastline. It is a major tourist area but I was lucky enough to be there before the main season so it all felt positively windswept and wild. It was actually literally windswept as it was a windy, even stormy, day during my visit there. But I’m not complaining at all. In fact that’s precisely the way I like it. The beaches were empty (save for a few brave kite-surfers and fishermen), the waves were amazing and the air was crisp and salty. 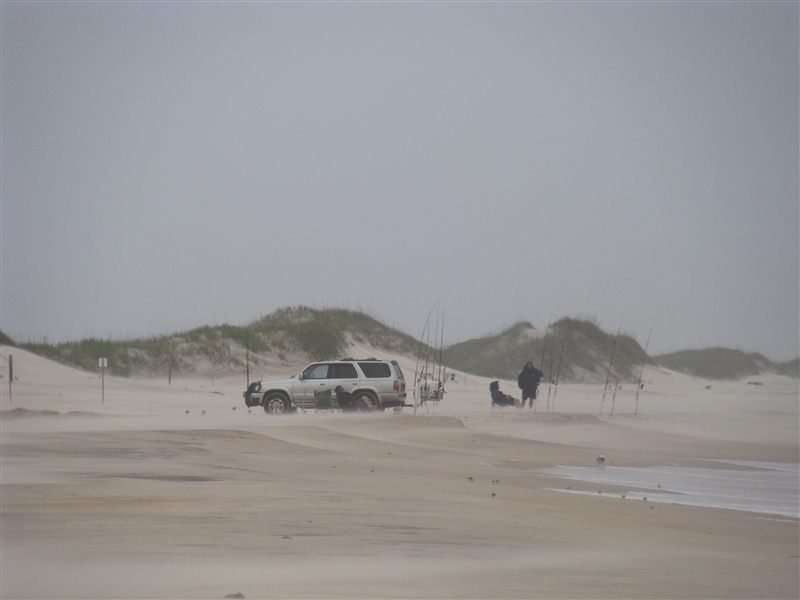 After entering the Banks at the town of Kitty Hawk, towards their northern end, I headed south towards Cape Hatteras. While looking for accommodation I accidentally ended up in the small town of Manteo, located on Roanoke Island, where the famous Lost Colony was located. Established in 1585 the colony of 108 disappeared before more settlers arrived in 1590. It is still a mystery as to what happened to them. There are a few theories but no conclusive evidence. Nowadays Manteo is a nice and quiet town of about 1000 souls. 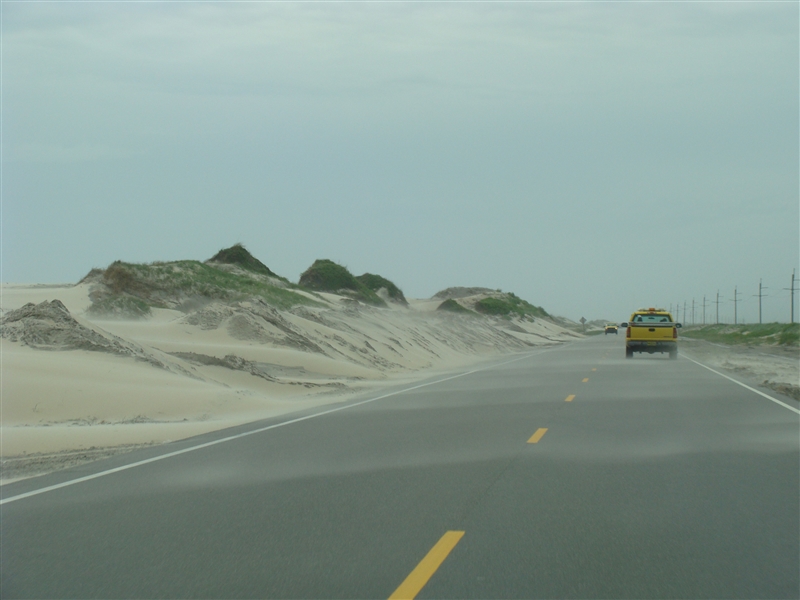 Further south the Outer Banks get wilder and wilder, with only one road, the NC Hwy 12, to choose from. Low sand dunes border the highway in many places and on windy days sand is blown onto the road. It looks quite spectacular but it is a constant danger as well as a headache for the highway maintenance crews who have to clear it, sometimes daily. Long stretches of this part of the Banks are protected by Cape Hatteras National Seashore and Pea Island National Wildlife Refuge which means that beaches are wild and all the development is contained in a few relatively small communities. One of them is lovely Buxton, a small unincorporated place dominated by the Cape Hatteras Lighthouse, which at a height of 64m is the tallest lighthouse in America. Due to erosion it was relocated 870m inland in 1999 but views from the top are still spectacular. 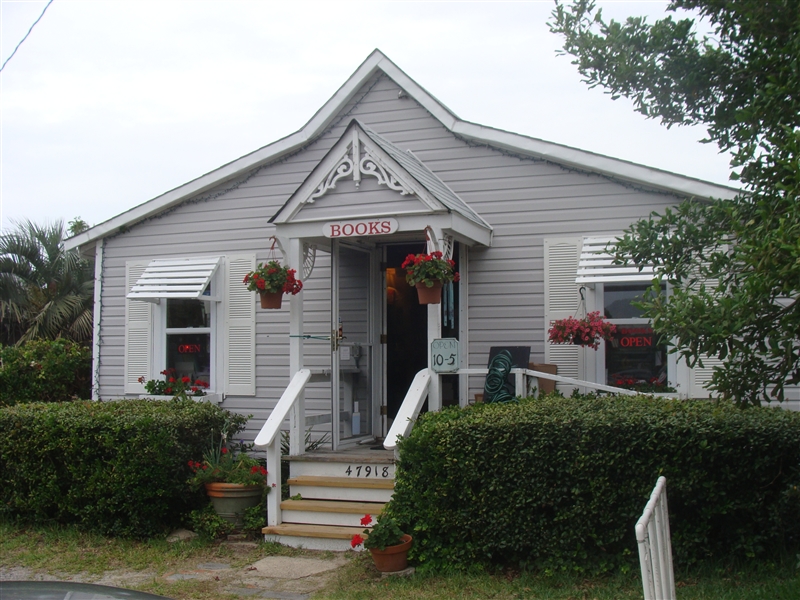 Further south is another unincorporated community, Hatteras, where I found probably one of the smallest bookshop in the world. It resembles a cross between a garage, a beach shack and a garden shed but the staff was very friendly and they have a good selection of local titles. Great shop.

Even further south the road eventually ends and to continue the journey one has to take the ferry. I was tempted to board it and visit the remote Ocracoke Island but by then time was becoming an issue, so I had to turn back north and then head back into the mainland.

I think the Mid-coast of America is much more interesting than many people think. Because it was the first area to be settled by Europeans there are plenty of sites associated with the early colonial history. But it is also a relatively wild and sparsely populated region, especially compared to the megalopolis further north. If you add the military heritage and hardware on display it definitely makes a quirky and fascinating holiday destination.