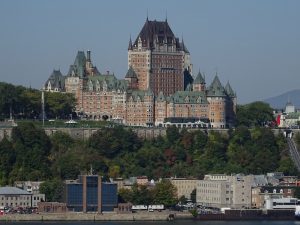 As I mentioned in the previous post, I knew I will be back in Quebec City. I just didn’t know that my next visit would be barely a week later.
After spending a few days in Nova Scotia (more about it later) we were driving back towards Montreal where we wanted to spend the last few days of our trip. But since we both enjoyed Quebec City quite a lot we decided to pay the city another quick visit.

As we didn’t have too much time we decided to stay on the south bank of the St Lawrence River, in the city of Levis. It was easier to continue our drive from there to Montreal and we didn’t have to waste our time driving into Quebec City in the afternoon traffic. What’s most important is the fact that Levis is conveniently connected to Quebec City by commuter ferries. 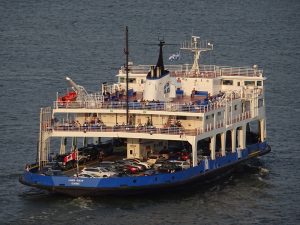 We watched them crossing the river back and forth a few days earlier when we were admiring the great views from the Terrasse Dufferin. Even back then we were tempted to take a trip across, but it wasn’t too convenient at the time. Now, by staying on the other side of the river, we could purposefully use the ferry. 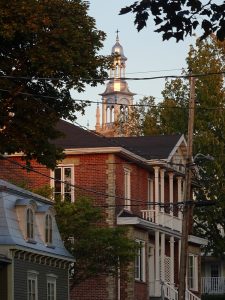 We left the car at the motel and headed towards the ferry terminal. It was probably about 20 minutes walk to get there. Initially we walked across rather generic suburban developments which looked as they could be located anywhere from San Diego to Buffalo if not for the French language on all the signs and shops. But as we got closer to the river things got more interesting. The architecture was getting steadily more historic and more “French” looking while the topography was getting more varied. Like Quebec City, Levis is also located on the steep banks of the St Lawrence River and its layout is equally interesting. 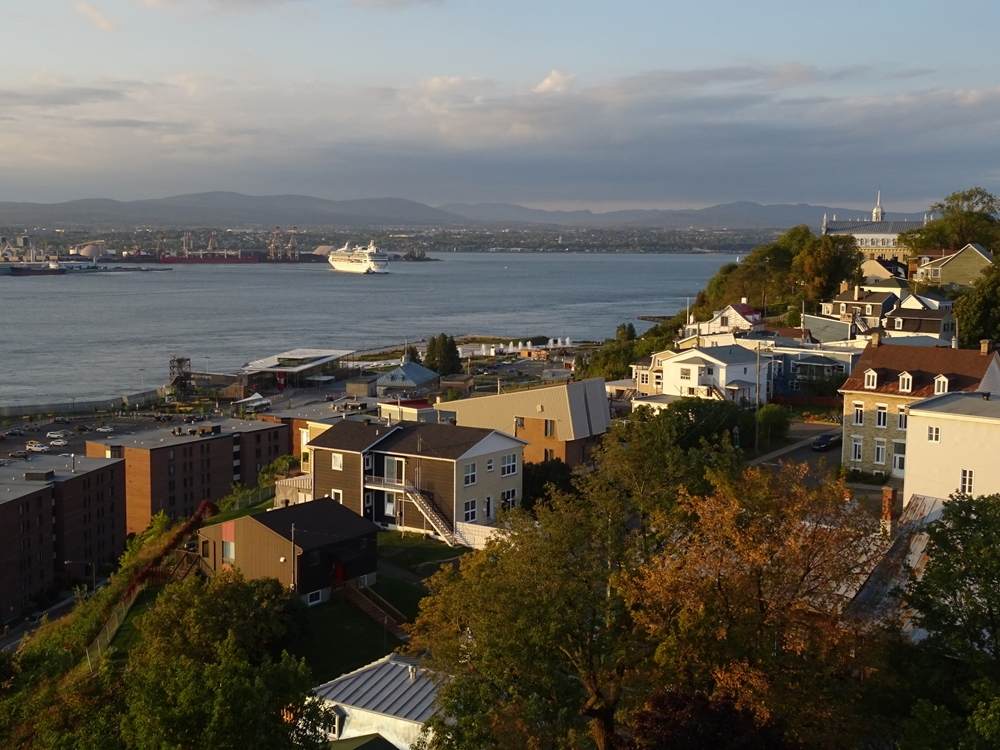 Before descending towards the ferry terminal we stopped at the viewpoint located directly across from the Old Quebec City. Here I have to admit that my jaw literally dropped once we got there. We were facing one of the best city panoramas I have ever seen. The city looked simply amazing with all the church steeples, “medieval” looking old town rooftops, some modest skyscrapers and, of course, the impressive Château Frontenac which dominated the view. Add the riverbank escarpments, hills in the background, port installations and even some post-industrial detritus a little further down the river and one ends up with a very interesting panorama. We stood there for quite a while admiring it all and watching the sun slowly setting directly in front of us, right behind the Quebec City skyline. 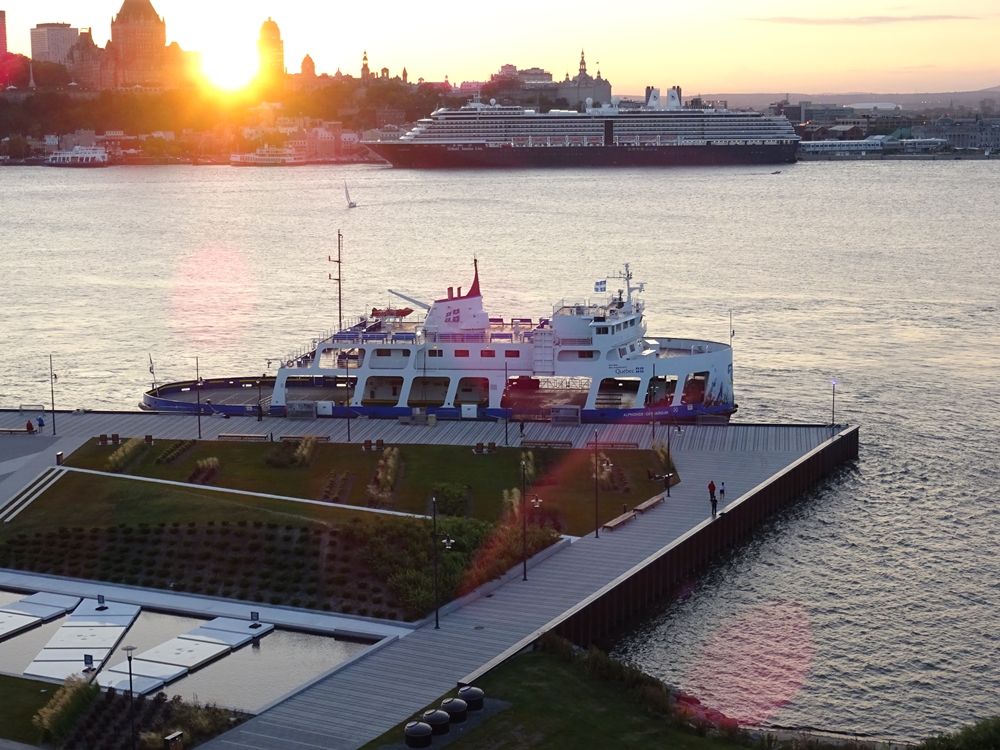 Now it was time to cross the river. We walked down to the base of escarpment via a long and quite exposed staircase leading towards the ferry terminal. It is a striking modern building standing in the middle of a nicely landscaped and clearly recently redeveloped area. The ferry terminal is also a hub for local buses which take commuters coming back from Quebec City to many places south of the river.
At the time of our visit there was a ferry crossing every 30 minutes (ferries travel more often in the morning commuter peak) so we bought the tickets and waited a few minutes admiring the Quebec City panorama visible through the floor to ceiling windows of the waiting room. We also watched as our ferry was docking and getting ready for boarding. I have to say 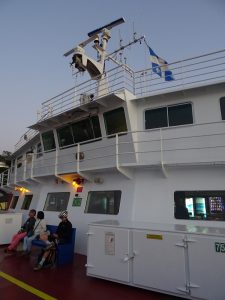 I love watching harbour activities, it is part of the reason why I like travelling by ferries.

For such a short crossing (around 12 minutes) the ferries operating this route looked quite impressive. In a way they must be quite sturdy as they operate year round, even in the challenging winter conditions, and the currents in the St Lawrence River are strong. This is serious commuter transport, not some touristy boat cruising in a nice weather only. Each vessel is able to take over 500 passengers and 54 cars. Once we boarded we went straight to the front of the top deck to admire the night-time view of Quebec City as were closing in on it. 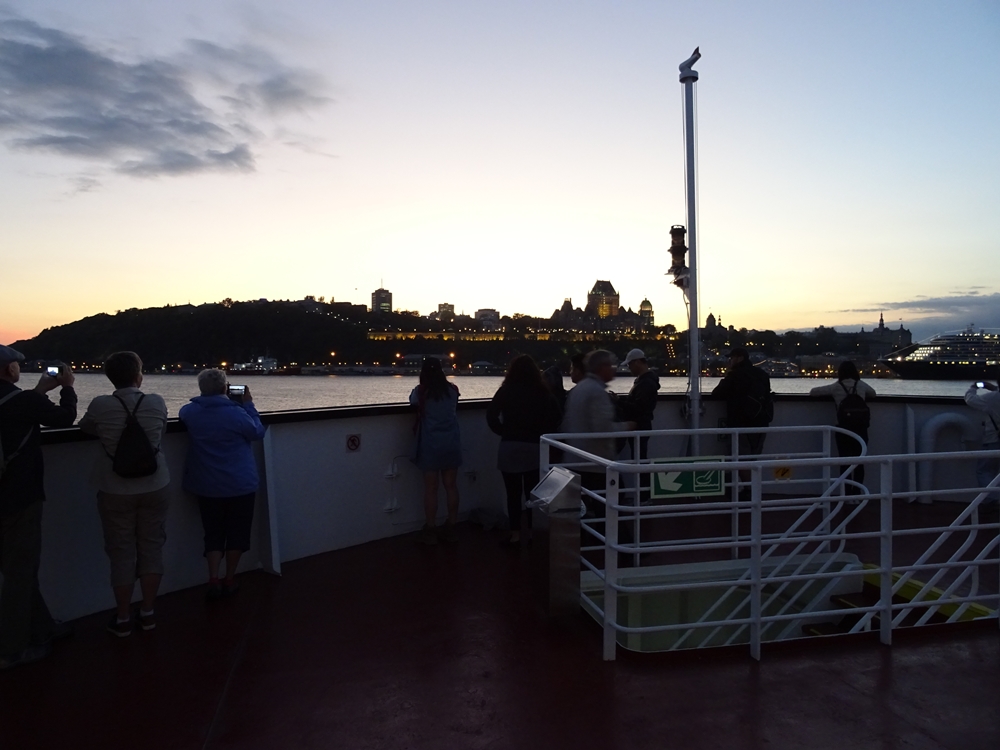 Once in the city we we walked again through some familiar places like Place-Royal and Rue du Petit-Champlain. In general we had a nice evening exploring the Lower and Upper Towns but we didn’t venture anywhere beyond the historic core. We didn’t have that much time and besides, we wanted to have some nice chill-out time, which we used to visit yet another bar. The big advantage of a second visit to any place is the fact that I usually feel less pressure to “see everything”. Another plus of revisiting any location is the nice feel of a certain degree of familiarity and basic local knowledge.

Anyway, as much as we both enjoyed Quebec City it was time to head back to Levis as the following day we didn’t want to start our drive to Montreal too late. So we walked towards the ferry terminal (Gare Fluviale), which in Quebec City is much more dated and less impressive than its counterpart on the other bank of the St Lawrence. After a short wait we boarded the vessel and once again we made our way straight to the top deck. Despite the night chill from the river (it was actually quite late) the views during the crossing were too good to hide inside. At night, the reflections in the water’s surface of the buildings lighting up the skyline add a romantic touch to the crossing. 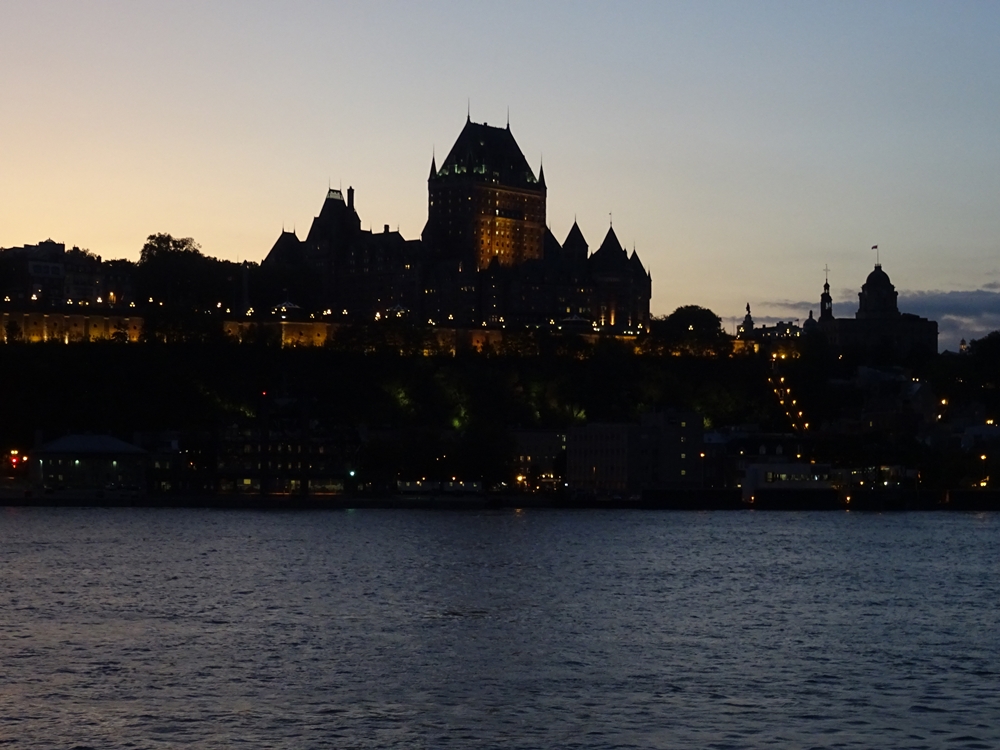 I’m really glad we took the ferry as the crossing offered a different perspective on the city, in fact on both cities. Besides, I have always appreciated commuter ferries in cities. I enjoyed travelling by ferry in New York City as well as in Seattle and in both cases the ferries offered unique views of their skylines. There is also something calming in water travel. The pace is slower so the panoramas unfold slower. You can see people sitting on decks, reading books, napping or even getting some tan. The last thing is definitely out of question on a commuter train. 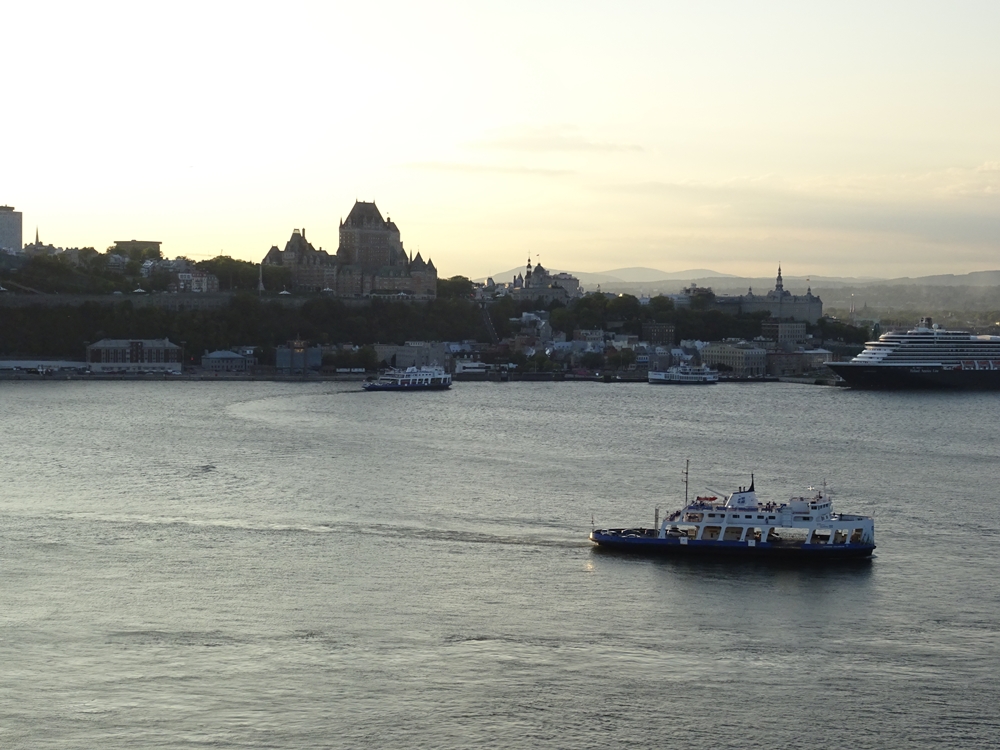 Once in Levis we walked straight to our motel via deserted streets. It is amazing how much more quiet the city is. It is barely a 1km away, and a 12 minutes ferry crossing, from the hustle and bustle of Quebec City, with its thousands of tourists from all around world. And yet here we found ourself in quiet town which could easily be located in the heart of rural Quebec province.

I would really recommend a trip to Levis to anyone visiting Quebec City. For at least two reasons. The ferry crossing, as I mentioned already, is spectacular and fun. And the city of Levis offers a less touristy, maybe a bit more “real” face of Quebec than its counterpart on the other side of the river.

This is definitely the last about Quebec City, at least for this trip.

As I wrote in the previous post, it is amazing place, much more varied and interesting than I have expected. And it says something as I already had quite high expectations.

I think I can safely say that I will be back in Quebec City, even if this time the wait will have to be a hell lot longer than a week. 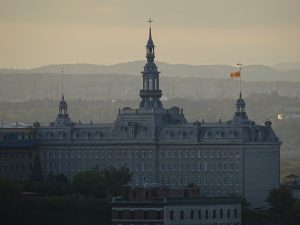