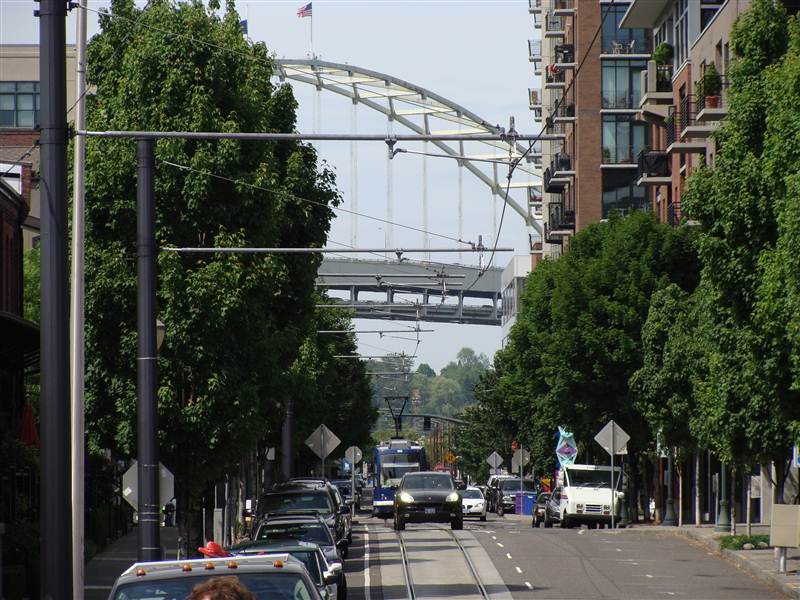 Portland is my favorite American city. Why? There are many reasons but lets start from the beginning. With population of just over 2 millions it is the largest city in Oregon and the third largest in the Pacific Northwest (after Seattle and Vancouver). It makes it just about the right size, not too big, not too small. You still have plenty of city attractions and general urban feel but you don’t have to fight the concrete jungle like in the LA, New York or Chicago. It lies on the banks of river Willamette just before it empties into the mighty Columbia river. Its compact downtown is located on the west side of the river and it’s surprisingly walkable. Street blocks are small and grid pattern makes it easy to navigate. If you tired of walking you can always make use of the excellent public transport network. It includes buses, light railway(MAX), streetcars, even aerial tram, and is free to ride in the central zone.

Cycling is another great option. Portland has one of the best cycling network in America and its citizens are keen cyclist. Nowhere in America I have seen so many people cycling. Portlanders are friendly bunch, keen on recycling, good beer, outdoor and, as I mentioned above, cycling. In other words all sort of activities people don’t normally associate with the United States. 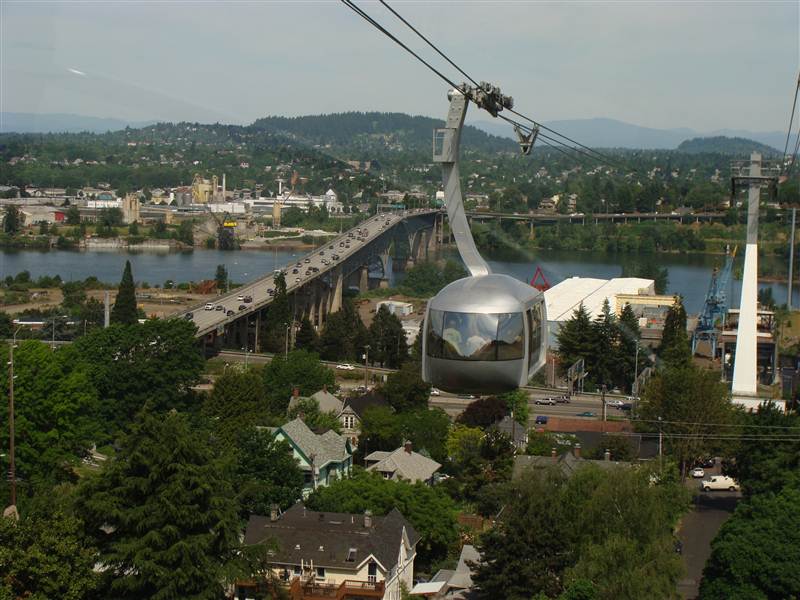 Portland lacks one single major tourist attraction but there are some sights worth visiting. Being an infrastructure geek, the first thing I went to visit was Portland Aerial Tram. It is commuter tramway which connects south waterfront and the major university hospital and campus. It costs $4 for return journey and climbs over 150 meters in about 3 minutes. From the top station you can see an amazing panorama of eastern Portland and surrounding mountains. Another great attraction worth some time to explore is Powell’s City of Books. The largest independent bookstore in the United States. It occupies the full city block and offers 6300m² (almost 68000 square feet) of the floor space, full of new and used books stored side by side. It is a real labyrinth where color coded maps, available at the front desk, are essential. Great fun for anyone who likes books.

Of course there are some museums and galleries but I didn’t bother with exploring them. Instead I decided to soak the city simply by exploring some of the nice neighborhoods. One of the best of them is North West Portland. It is in a walking distance from the downtown and is full of the old houses, restaurants, pubs, bars, shops and trees lining the streets. You can feel great communal spirit there. For example hostel where I was staying had agreement with the local pizzeria so any unsold pizza, at the end of day, was offered for free to the hostel guests. In the same way we got free bread rolls from the local bakery. All we had to do was to find a volunteer who wants to walk about 5 minutes to collect them. Portlanders just seems to hate waste. 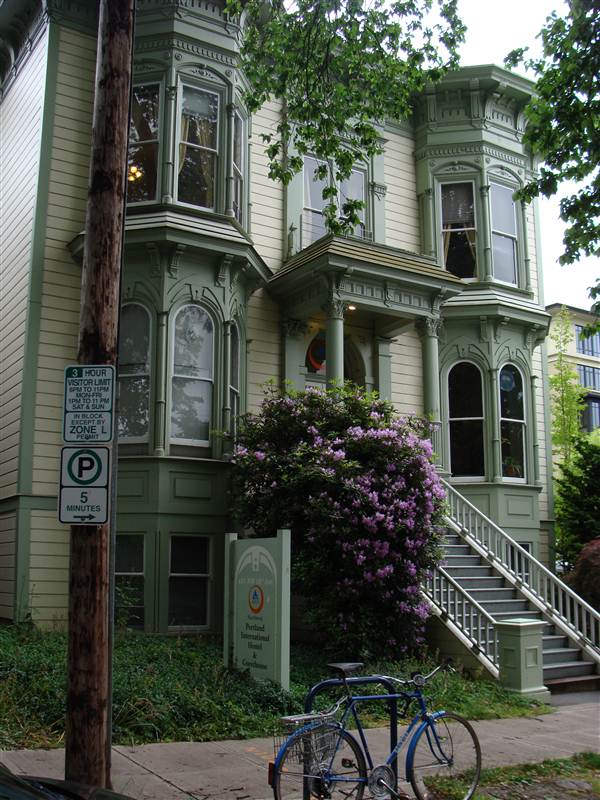 HI-Portland Hostel, Northwest, is well worth recommending. Located in the old wooden house it is very clean, quiet and well run. It is great place if you are looking for good sleep and good company but not necessarily for party atmosphere. If you want some party, or at least some drink, there are plenty of options alongside NW 21st Avenue which is just few minutes away from the hostel. Speaking of drinking, it is worth remembering that with 28 breweries Portland has more breweries than any other city in the United States. It is in fact place where in the 1980s microbreweries craze started.

Short walk or MAX ride west from NW Portland lies Washington Park. It covers over 50 hectares of mostly steep and wooded hills ranging in elevation from 60 to 260 meters. Somewhere there are major tourist attractions like Oregon Zoo, International Rose Test Garden (one of the Portland nicknames is in fact The Rose City), Portland Japanese Garden and few others but I didn’t find them. Here I have to admit that I got a bit lost while exploring the park. I simply underestimated its size, complicated terrain and how densely wooded it is. But I still had nice afternoon just walking around trying to find my way back and escape coming rain. Washington Park is just smaller brother of the Forest Park which covers over 2000 hectares and is one of the largest urban wilderness parks in the United States. 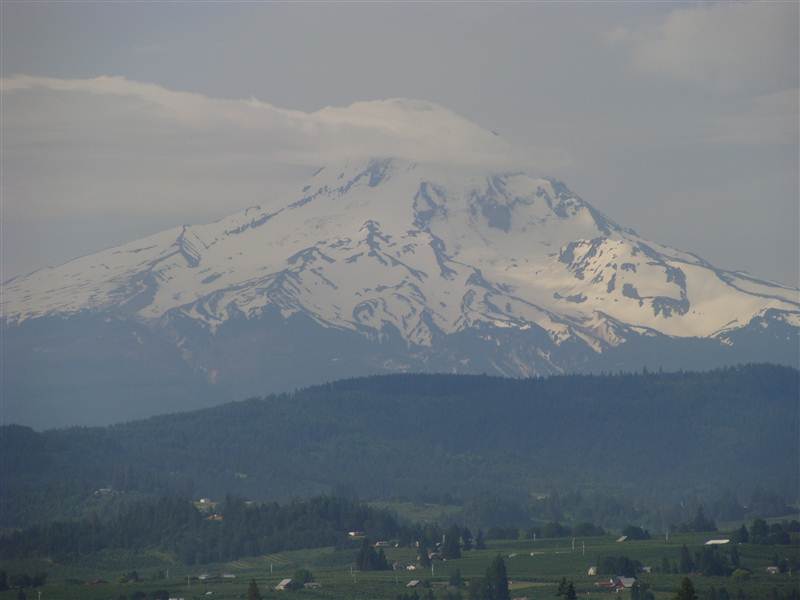 But I left the best aspect of this amazing city for the end. It is its location. And what a great location it is. If you look from any high point in the city (like Aerial Tram top station) you can see not one, not two, but three massive, snow covered volcanoes. They are Mt Hood, Mt Adams and Mt Rainier. On a sunny they they look absolutely spectacular.

About two hours drive in opposite direction you can reach Pacific coast. With some spectacular wild beaches it offers great options for weekend getaways. One of the closest and the best places for one day visit is Canon Beach with landmark rock formation called Haystack Rock and adjoining Ecola State Park which offers great hiking and coastal views. South of Portland rural Willamette Valley is one of the best vine growing regions in the United States. 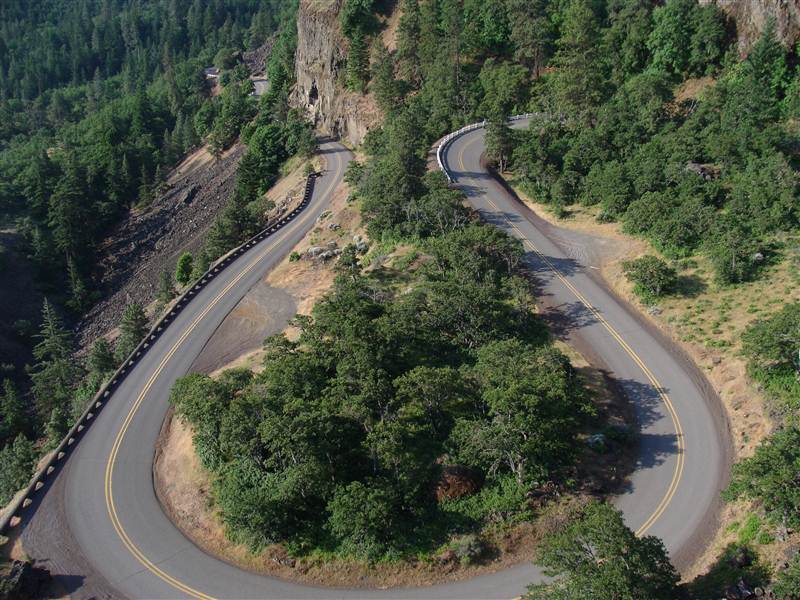 But in my opinion the best approach to Portland leads from the east. I was driving all the way from Idaho and for the last 200km road hugged the mighty Columbia river. Initially the landscape is wild, bleak and open but as road approaches Cascade Mountains the river valley narrows and Columbia River Gorge begins. It is absolutely fantastic place. I left the main interstate highway which follows the river at the bottom of the gorge and choose the Historic Columbia River Highway instead, which traverses and climbs high cliffs of the gorge. It is twisty and narrow route which is popular among cyclist and motorized tourists. Some sections are closed for cars altogether and open only for cyclist and walkers. One of these closed sections includes narrow tunnels, drilled in the basalt cliffs, which contain windows offering view of the valley.

One of the best views along the route are from the Crown Point. But the great vistas are not the only attractions of the gorge. As river cuts its way through the Cascade Range you can notice change of the vegetation. Bleak dry vegetation of the eastern Oregon is replaced with the lush vegetation of the Pacific coast. It happens because Coastal Range is a major watershed blocking humidity from the ocean from reaching further inland. Byproduct of that are 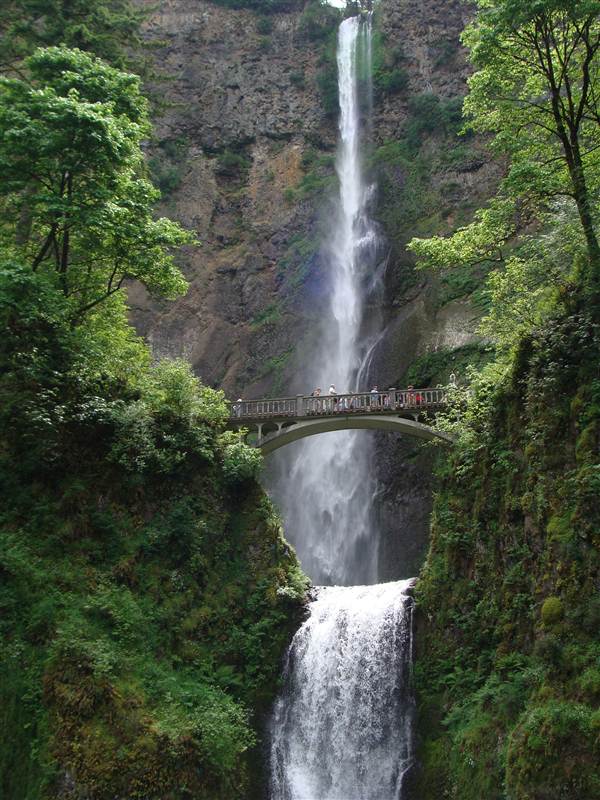 numerous, (over 77 on the Oregon side of the gorge alone) and spectacular waterfalls. Probably the most spectacular of them (and definitely the most photographed) are Multnomah Falls. If you browsed any guidebook to Oregon the chance is you have already seen it. It is the one with bridge in front of it.

Immediately east of the gorge lies Hood River. It is a nice small town, local center of major fruit growing area. On the steep streets you can find nice cafes and restaurants serving food made of the local products. From above the town you can see massive, cone shaped, Mt Hood looming above this lovely rural idyll. It is simply small and happy town.

All these wonders are no more than two hours from the downtown Portland. It makes it perfect place for the outdoor lovers. At the end it is the city where companies like Nike or Columbia Sportswear started and are still located. It is not a coincidence. For me, it is probably the only city in the United States where I could easily relocate from London 😉

So if you are looking for relaxed and easy going place to spend some time on mixed urban – outdoor holiday, Portland is the perfect place for you. Just pack some good walking shoes and rainproof gear, leave tie and fancy clothes at home, and you ready to go. You won’t be disappointed.