Nova Scotia is a province of mostly small towns. The only sizeable (to some degree) community is the capital, Halifax. And that’s where we decided to stop for a day. We booked ourself into a hotel located in a pleasant neighbourhood, full of old colourful wooden houses, and then headed into the centre of the town. 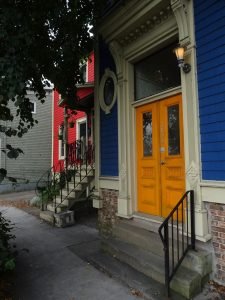 Just 10 minutes later we reached our first stop, the Halifax Citadel (located on rather unimaginatively named Citadel Hill). It was established by the British in 1749 as a counterbalance to the French stronghold of Louisbourg (which we visited previously). Halifax played a pivotal role in the following decade, in the Anglo-French rivalry in the region. But the current impressive, star-shaped, fortress was actually built much later, during the Victorian Era (it was completed in 1856).

The site is run by Parks Canada and is one of the most visited attractions in Eastern Canada. Luckily on the day of our visit it wasn’t too crowded (travelling outside the main season has many advantages). 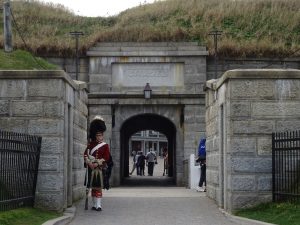 We entered the fortress via a drawbridge and a massive gate, manned by staff dressed in historic uniforms. Specifically dressed as soldiers of the 78th (Highlanders) Regiment of Foot with their tartan kilts, sporrans, red coats and impressive headgear. They looked splendidly “Scottish”.

Inside there is an interesting exhibition about the history of the fortress and the town of Halifax as well as some military gear displayed, but overall the site is far less interesting than the fascinating Louisbourg. In my opinion the best aspect of the citadel are the amazing views from the ramparts, especially towards the downtown, the harbour and the town of Dartmouth on the other side of the Narrows. Halifax downtown, with its few modest skyscrapers, is located directly below the citadel, with the street grid stretching all the way to the harbour. To the left we could see quite an impressive suspension bridge connecting Halifax and Dartmouth (Angus L. Macdonald Bridge) while to the right we could see the Georges Island (with some fortifications, albeit on much smaller scale than the citadel) and the harbour stretching eastwards towards the open Atlantic. After taking same photos (and listening to a lone piper) it was time to go down (literally) to the town. 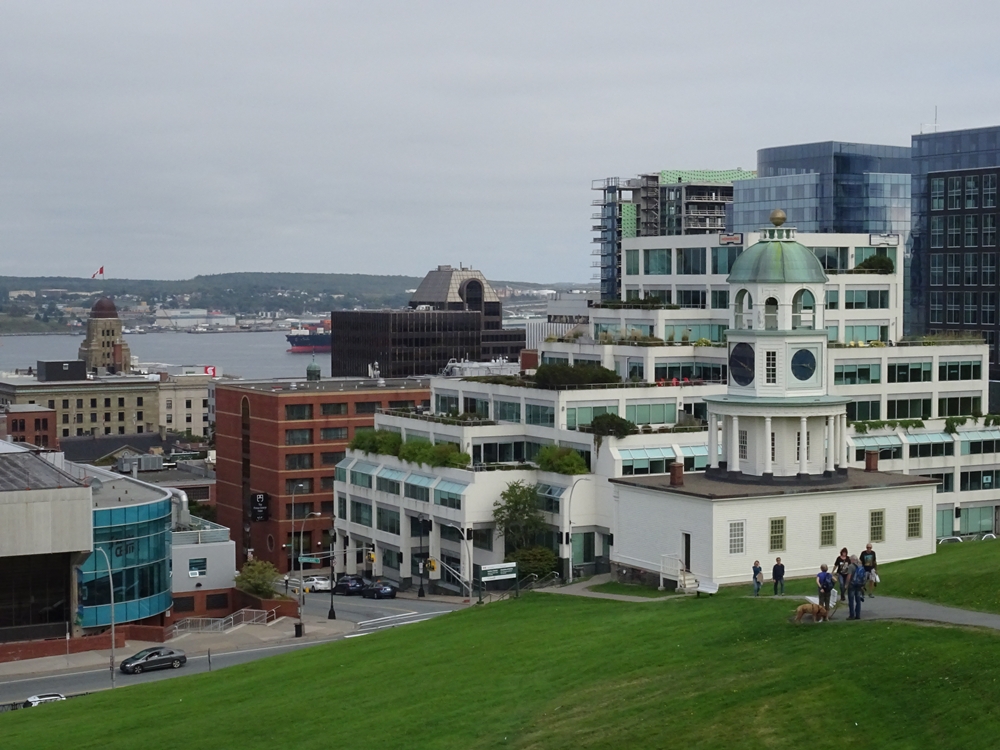 As I mentioned, Halifax downtown doesn’t have impressive skyscrapers, one can clearly see that it is town of modest size (the whole metropolitan area has a population of around 400 thousands inhabitants). Still, we wandered around for a bit, admiring some historic architectures. One of the most important buildings in Halifax is St Paul’s Anglican Church which, founded in 1749, is the oldest surviving protestant church in Canada and the oldest building in Halifax. But it is just a rather small church. Architecturally speaking, far more impressive are some of the buildings from the beginning of the 20th century.

One of them is the Art Deco style Dominion Public Building which was the tallest in Halifax when it opened in 1936. Empire State Building it ain’t but in Halifax it makes quite a landmark. Next to it stands the Bank of Nova Scotia Building, also built in the early 1930s, in style which some call the “Canadian Deco”. 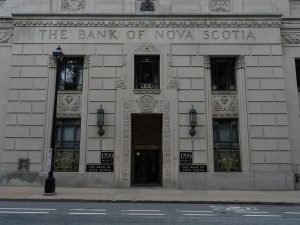 It is an absolutely fascinating structure full of intricate detail depicting flora and fauna native to Nova Scotia but also ships and historical events. This connection to Canada is typical for architect John M. Lyle who designed similar buildings in Ottawa, Toronto and Calgary.

Finally we reached the Halifax harbour. Along the waterfront stretches a boardwalk build of heavy timber which offers great walking opportunities. During our visit it was by far the most lively part of town. Probably the biggest attractions on the waterfront are The Pier 21 Immigration Museum and the Maritime Museum of the Atlantic. However fascinating they may be, it was getting late and it was Sunday, so we decided skip the museums and to relax by simply strolling along the waterfront rather than trying to squeeze too much into our itinerary. It was a good decision and we had a great time people watching but also observing ships entering and exiting the harbour. There were some massive ocean-going vessels but also small pleasure craft as well as ferries crossing the harbour. 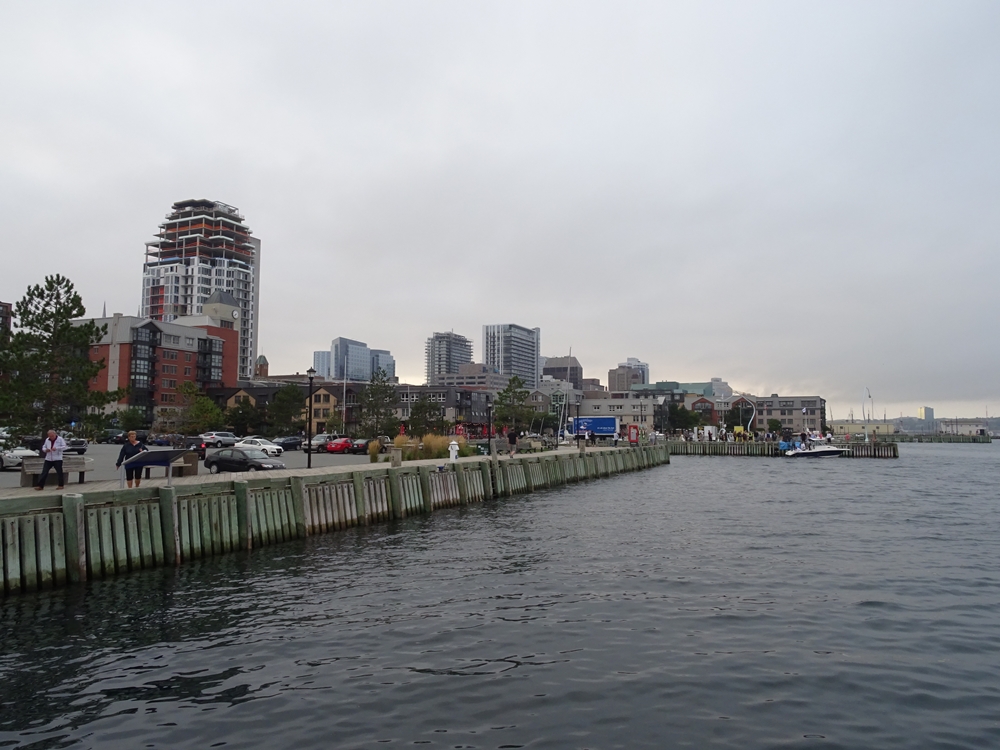 Like Quebec City, Halifax also has its fleet of commuter ferries, connecting it with Dartmouth on the other side of the harbour. One has to be careful with comparisons though as the ferries here are much smaller than the ones in Quebec and they don’t carry vehicles. In fact they look quite a bit like bath toys. But the service started in 1752 which makes it the oldest saltwater ferry in North America and one of the oldest in the world. Unfortunately it was getting late and we didn’t really have any reason to travel to Dartmouth so we didn’t have a chance to experience the crossing. 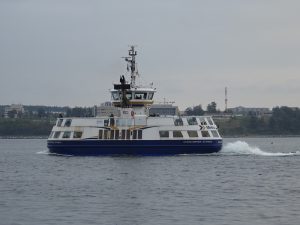 Instead we found a rather nice restaurant and settled for a meal outside, with a view of the harbour. We could dine while still watching ships, ferries and boats. It was great location but I have to say that food wasn’t particularly amazing, in fact it was average at best. Frustratingly the whole “experience” ended up to be rather more expensive than anticipated initially.

Here I’m going to moan a bit. If I have to pick up one thing which annoys me in North America is the pricing which exclude the taxes, and the whole tipping culture. Sure, one can calculate things in the head, at least roughly, but it really drives me mad. One always ends up spending more than expected. To make things more complicated taxes also differ between provinces in Canada or states in the US. Why they cannot include them in the prices quoted in the menus or on the shop labels? Would that be too easy for the customers? And then I never know how much to tip, I only know it must be more generous than anywhere in Europe. Luckily some local craft beer soothed me eventually so the evening ended well (and the waiter got his tip at the end).

Next day historic communities in rural Nova Scotia were awaiting us so stay tuned. 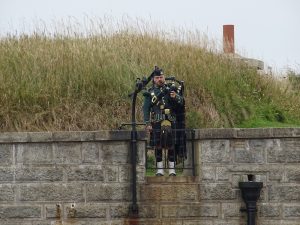